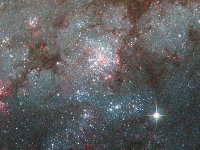 The bright, colorful stars in the center are newly formed from a gas cloud that was used up and blown away by the formation of the stars. These are mostly giant stars that will burn out relatively quickly. The grain of the image is created by uncountable smaller stars in the background that burn more slowly and have been around for a long time. The huge star with rays is actually in our galaxy, and is millions of times closer than the rest. That's why it looks so large.