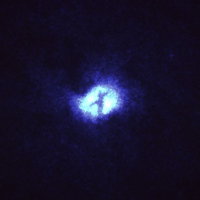 This image was taken with the Hubble Telescope using a different camera and filter than the other images. It shows stars and gas that orbit the black hole, and have been sped up to tremendous speeds by its gravity. The thick, dark bar is part of a torus, or doughnut of dust that encircles the hole. The thinner bar took astronomers by surprise and they aren't sure what it is. The black hole itself is not visible. Its diameter would be about a million times smaller than a single pixel!